After months of planning, a few days of some serious errand running and some weather worries, Amy and I were married in a perfect, beautiful ceremony in my parent’s backyard!   It was definitely a sprint getting the backyard all set-up but it really came together well.  The best decision we made in the few days prior was the renting of patio heaters and having a fire, it got pretty chilly for we Arizonans.

While there were some stressful times as we navigated the problems that come up as an event comes together, it was cool as family and friends from out of town started to arrive.  My parents had a small get together on Friday night, everyone seemed to have a good time even though a pretty substantial dust storm blew through that day and evening. It would have been a serious challenge if  the storm had of come through on Sunday, we dodged a bullet there!  On Saturday we got the rental items delivered and set-up and had the rehearsal. While there was some good natured ribbing of Amy for her information folders that everyone got, these proved to be infinitely valuable as the event approached so everyone knew the tasks they had been assigned.

The rehearsal went smoothly and afterwards we adjourned ourselves to The Living Room for the rehearsal dinner.  This place did a great job and we had a really fun night. We wanted to have a nice relaxed atmosphere and be able to just hang out with our wedding party, the two sitting areas with couches worked perfectly!  It was some great noshing on bruschetta, cheese trays, cheese fondues, spinach dip and a chocolate fondue to finish things off.  We all had some wine and great conversations! After that party broke up Amy and her bridesmaids headed to the hotel and I went home looking forward to the big day ahead.

The day of was a whirlwind of activity! We started putting the finishing touches on the yard around 8:30 am, since some tables had to be set up after the ceremony we organized boxes for each table’s items to make it easier for the caterer to set them up.  This was key in making it a smooth transition and Amy’s bridesmaids and the caterer did a great job making it happen.  After we got most of the things set up I was off to run my final errands, this took much longer than planned.  Had to pick up tables from the restaurant, stock the coolers for the bar and get ice, pick up the keg, and get the tables set-up for the buffet. Then get cleaned up at the barber, take shower and make it back to my parents house to get dressed and be ready for our guests to arrive.

The cocktail hour started at 3:30 and we had a great showing! It was a nice way to start things out, seeing everyone and people catching up and enjoying some tasty beverages. The specialty drink, The Kentucky Classic (Maker’s Mark and Ale-8-One) was very popular, so much that the bartender had to run out and get more Maker’s during the ceremony!   That hour flew by and all of a sudden it was time to start the ceremony.  Everyone took their seats or found a spot to stand and we were ready to go!

Sage Gentle-Wing, our musician played a nice guitar rift during the first part of the processional, after our wedding party was set he busted into The Beatles song “Here Comes the Sun” and Amy and her dad walked out, she looked amazing in her dress! Our minister, Phil Waring, did a great job, the ceremony was perfect and not too long. We were announced and Sage busted into “When I’m Sixty Four” as we walked away finally married.

We headed out for some pictures and the guests got to enjoy some appetizers and drinks for a bit. I have really enjoyed working with our photographer, David Orr.  He and his wife have been super easy to work with and we’re excited to see the the pictures they captured!  After that we all enjoyed some great food prepared by Creative Hands Cuisine, Chef Doug and his team did a fantastic job, from the quick table transition to the seamless service it was top notch! Highly recommend these guys!

After we ate we began the rounds to hobnob with everyone, it was so nice to see all of the people who came out to help us celebrate. There were some nice toasts and then some great hanging out, the fire pit has a bench and was a great place for people to talk and stay warm and the patio heaters worked perfectly!

A few other vendors of note: Bloom Events provided some beautiful flowers, and Sugar Lips Cakery cupcakes were amazing!

All and all it was great day, here’s a few pics from family and friends (David Orr photos still to come): 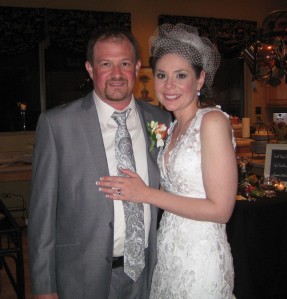 Only one week to go until we get hitched! Fortunately, we’ve gotten a lot accomplished in the past few weeks. While we definitely had some stressful times it’s nice to see it all come together, I really think its going to look nice.
Yesterday we went to my parents to start the backyard decorating and haul somethings over. We got a lot done and my parents have really done a great job getting their house ready. So nice of them to let us take over their house, really allows us to create the intimate feel we want.
Our earlier planning (mainly Amy) has really allowed us to start to relax as things come together. Guests start arriving Thursday, so it’ll really start up then!

Some of the lighting we did last night:

And The Adventure After That

It was great to see the family back in Kentucky. Ended up spending the night in Chicago because our flight got canceled, but made the best of it. Got to see all the nieces and nephews for Amy’s birthday (somehow we totally forgot to take any pics). Had a great dinner over at a friend’s, Amy got to spend some time being Aunt Amy and I got to checkout the rock climbing areas we used to hit up!
Unfortunately our favorite restaurant is closing soon. We’ve probably celebrated 3/4 of our anniversaries here and stopped by many other times just because! I’m so glad we could get in one last, fantastic meal there!!
A new neighbor moved in to our tree! #hummingbird
The bets are in! #derby #kentuckyderby
Fun ski day at Arizona Snowbowl! Great to be back on the snow after 2 years of no skiing. They’ve done a lot to this ski area and have made it so much better!!
Today is our 10 year wedding anniversary! I feel so happy and lucky to spend my life with this fabulous person!!