Posted on February 13, 2012 by Adventures Outdoors

I’ll start this blog post out like many other posts I’ve seen: It’s been a little too long since I last posted, but I’m trying to make an effort to do better!

On Sunday it was time to go for a ride away from our normal stomping ground of Pecos Rd, so we headed up to Fountain Hills for the 9 mile hill/N. Scottsdale Loop. We got to the starting spot a little later than planned, but met the owner of the bike shop that is in the plaza as he was showing up to open his shop (this turn out to be a nice thing relatively soon).  Finally we were ready, and off we went!

The start of the ride is a nice little downhill followed by some rolling hills,  about 2 miles in my friend Len gets a flat tire.  Upon examining his tire, it was shredded, there was no way a tube would last in that mess of a tire!  I rode back to the bike shop (the owner was surprised to see one of us back already) got him a new tire and a couple of tubes for good measure.  Headed back down the hill and Len got his bike going again, back to the pedaling.  Cruised along for a ways, there are some cool downhill sections as you head towards the town of Rio Verde.  You can see the river, the Four Peaks and many other mountains, besides the beautiful high dessert in the area!

After a bit we got to the first challenging section of the ride, 9 mile hill.  It’s pretty much what it sounds like – 9 miles of slightly up hill, not super hard but it just doesn’t stop for 9 miles!  Bill and I got to the top and hung out for a bit as Len caught up.  The next section of the ride is by far my favorite,  a fast cruise, slightly down hill on Alma School and Happy Valley Rd.  It takes you past the Four Seasons Resort, Reata Pass, Greasewood Flats, and Desert Highlands. It’s a fun, fast couple of miles!

After that section we cruised through DC Ranch and back towards Fountain Hills.  Len was off the back during this section, quite unhappy and feeling worked. We’d find out why later.  As you come back into Fountain Hills there are 3 short, but steep climbs in the last few miles.  After negotiating these you get a high speed cruise back down to the bike shop.  This is one of my favorite rides in the valley, you get solid up hills, some great downhills, and a lot of beautiful scenery of all kinds!

Back at the truck as we were loading up Len noticed that he didn’t do that great of a job putting his back wheel on his bike after the flat tire, his tire had been rubbing the frame for 50 miles!  Definitely explains why he got so worked! The owner of the bike shop helped him get it straightened out and even gave him a bottle of Hammer Recovery drink.

After loading up we had to drop Len off at his Kickball Game (probably not the most enjoyable game after the ride) and make our way back south. All in all it was a great day, beautiful out and an awesome ride!

Here’s the map of the ride: 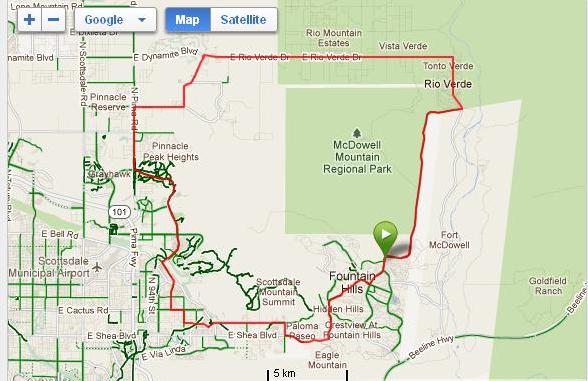 I try to be a pretty laid-back person. I enjoy triathlon racing, a few beers, and finding the comedy in life. Kentuckian. View all posts by Adventures Outdoors