My two friends and I decided to sign up for Ironman Arizona 2015. It’s a very popular race, so to guarantee a spot we volunteered for this year’s race.  My friend, Bill, decided we were volunteering for boat duty during the swim, it ended up being awesome!  While it was an early morning, we had a greatl vantage point, and it was really cool to be in a powered boat out on Tempe Town Lake!

I was able to get a great view of the race start and the washing machine of the first few hundreds meters. Cruising around the lake was really cool, it’s amazing how much that area has changed just in the 16 years I’ve been here.  I ended up watching over a guy who was struggling about halfway through the swim. There was a group of guys cheering him on whom I assumed were his buddies, traveling here to support him, because of how passionate they were in their cheering for him. It turns out that they were just some cool local tri peole cheering on a guy who was having a rough day, I think that is awesome! I ended up having to give him a ride in the boat back to the swim finish, because he missed the swim cut-off time. I felt bad for him, he had traveled from St. Louis, a long way to go for your day to end so soon!

After that we cleaned up the buoys, loaded up the boats, and headed out.

The next morning I got up to stand in line with the other volunteers to register for next year’s race. It set a record for the quickest sellout of a US Ironman! So now, I’m all registered for next year with a fun year of lots of swimming, biking, and running with two good friends!

Here’s a few pics from the morning, and I’m going to attempt to do many posts about his year’s training fun! 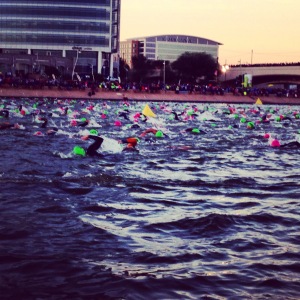 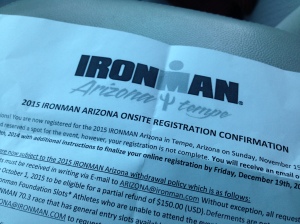 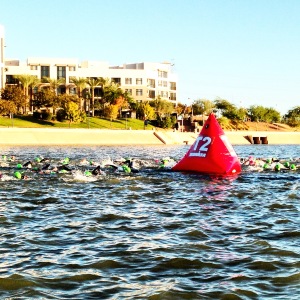 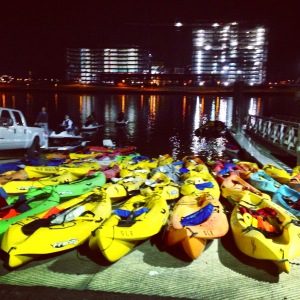 Like Loading...
This was a great overall experience,  I got to train for the race with two really good fiends, we had nice weather and the IM people put on another great race!  I headed down on Friday to get checked in and hang out at my friend’s booth at the expo.  It was fun to just be down there and soak up the scene.  We cruised around Tempe Beach Park, grabbed some food and hung out, a pretty good day.  On Saturday I made it down about 10:15 to check my bike in and jump in the lake for a bit.  When I got there the bike check in line was huge, I wrestled the wetsuit on and went for a 15 minute swim, it was nice to get a feel for the water.  When I got finished swimming there was almost no line to check in the bike!  After a getting the transition bags checked in I headed for home.  Amy and I went out for a quick bite to eat and made it to bed around 9:30. I slept pretty well and woke up about 4 am, had a bagel with peanut butter, got dressed, grabbed my gear and headed out.

Found a good parking spot pretty easily, I had to put some food in my T1 bag and filled up the water bottle on the bike. After getting body marked, I met up with my friends for a bit and we all went over our plans for the race. Had a little extra time so Amy and I laid down in the grass for a bit. She brought her sleeping bag and I had my big red WKU Diving parka, made for a nice little nap!

The start of an IM race is always a cool experience, the helicopter flying overhead, the national anthem playing, the excitement of what’s to come! The gun went off and the day began! I settled into a pretty good rhythm and tried to keep calm. It seemed like there was a lot of contact in the water, I bumped into some girl a couple times and she must have gotten mad because she kicked me in the side pretty hard. If you get mad about people running into while swimming in the murkiness of Tempe Town Lake you’re probably going to be mad most of the swim.  I set a good pace and felt solid the whole way. Got kicked in the goggle about 200 yards from the finish, fortunately it didn’t hurt too bad or knock my goggles off! Swam to the stairs and I was out of the water!  Good IM effort swim, about 1 minute faster than my previous races.

The strippers did great, got me out of my wetsuit quickly and I ran off to get my T1 bag. I usually just change in the grass outside the tent, it’s too hot and crowded in there and since I wear the same thing the whole time it’s just easier and nicer this way. Grabbed my bike and away I went!

Felt great leaving transition and had a solid first lap, during the second lap the wind picked up a little. I tried to keep my heart rate down and spin my way up the hill and then roll down at a good clip.  On the third lap I backed it off a little to ensure my legs were ready for the run.  I could have pushed it a little more but I feel like I rode a smart ride.  I did a good job taking in calories and ate 3 bananas from the aid stations.  It’s a great feeling to get to Shea Blvd on your 3rd lap, all you have to do is roll on back into Tempe and you’re done with the bike ride!

Handed off the bike to the volunteers and headed into the changing tent to get a little break from the sun.  Ate some pretzels they were handing out in the tent, got the shoes on and got slathered up with sun screen!

Pretty happy with my run.  In the past it has been my undoing in IM Races and this year I was determined not to let that happen.  I started out a little fast, but settled into a comfortable, sustainable pace.  The first lap was probably the toughest for me, the end seems so far away and it’s been a long day already.  About 1/2 way through that 1st lap my right foot was feeling numb, this worried me because I didn’t want to have to start walking.  I sat down and took off my calf compression sleeves and this totally fixed things, from here on out I just started feeling better and better!  I walked through the aid stations and ran to the next one, these little respites from running gave me just enough rest to keep cranking out some good miles.  I wanted to finish under 12 hours and knew it would be close, I picked up the pace about 4 miles out from the finish but just couldn’t make it happen.  I was bummed I wasn’t coming in under my goal but dug deep to get as close as possible, while I was hurting pretty good those last few miles it felt great to be pushing that hard. It’s awesome to make the last turn on to the lake path and run past all the cheering people, really helps you keep going!  I made the turn towards the finish and the feeling, like usual, makes all those hours of training worthwhile!

This is my best IM run by far, and I’m pretty happy with it! 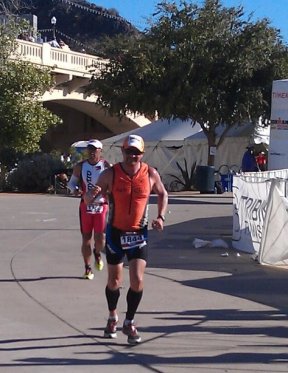 Found Amy and my parents, grabbed a few sodas and sat down…
Had some time to kill while I waited for my friends to finish, actually had a post race cocktail (something I’ve always tried and failed to do post IM), it didn’t taste that good.  Met up with our cheering section and watched my friends finish!

Could have been a little stronger on the bike.

While I didn’t come in under 12 hours it was still a 31 minute PR, I’m happy with that.

They always put on a great show and this race was no different.  I think this will be my last IM for awhile, it just takes up so much of your life, but the whole thing was a great experience.  I was lucky to have some of my best friends to train with and my wife to support me during the long summer of endless bike rides and runs.  Like usual the AZ Tri Clubs folks were great out there, they had an awesome cheering section that kept me going! The support from the volunteers and fans really pushes this race over the top, the energy out on the run course is awesome!
Most importantly the 3 other people I signed up for the race with  all finished, so it was a successful day and 2 first time ironman finishers got to hear their name called by Mike Reilly!

…and another great race in my @XtenexUSA laces!

Great afternoon for some neighborhood hiking!
A little cruise on a nice cloudy day!
Double rainbow!
Merry Christmas! Time to see the Nutcracker!
Great dinner with an old friend. Twice in one year getting to hang out after about 20 of not seeing each other!
Finally got a chance to fire up the Green Egg again, and it was good. Mornings and nights are starting to be ok!